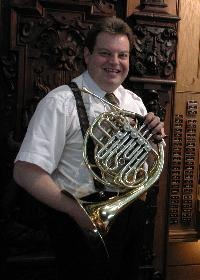 Lukas Christinat was born in 1965, as the fourth child of Werner and Marietta Christinat-Jaussi in Burgdorf (Kanton Bern), where he also went to the secondary school.   As a child, Lukas learned the violin by his mother, later he received horn lessons from Kurt Hanke inBern.   1980 and 1983 the master classes  Hermann Baumann in Essen (Germany) followed. He began his own music studies at the Lucerne conservatory by Francesco Raselli. In 1985 after the early death of his teacher Francesco Raselli Lukas Christinat was invited by Hermann Baumann to continue his studies by him at the Folkwang Musikhochschule in Essen.   1987 Lukas Christinat returned to Switzerland and completed his recruit school in the Swiss Army.   1990 Lukas obtained the soloist diploma by Jakob Hefti at the Conservatory of Lucerne.   Already during his education he has received prizes and awards: 1986 the Friedl Wald Foundation Award  and in1988 the Edwin Fischer Memorial Prize.   Soon, he started to work in various orchestras, including the Zurich Tonhalle Orchestra and the Lucerne Symphony Orchestra, and performed both at home and abroad as a soloist and chamber musician. Lukas Christinat plays regularly as principal horn in the Zurich Chamber Orchestra and the Tonhalle Orchestra Zurich, Concerts as a soloist with the Radio Symphony Orchestra of Basel, the Camerata Zurich and Lucerne Symphony Orchestra. In May 1985 concert tour with Hermann Baumann, horn quartet and the Southwest Radio Orchestra of Baden-Baden.   In 2002 he produced his first solo CD, "In Memoriam" incl. works by Francesco Raselli, Camille Saint-Saens, Reinhold Gliere together with Wolfgang Sieber at the Great kuhn organ. In May 2009 they released their second CD " Imressionen".   Lukas Christinat plays concerts and gives master classes in Europe, China, Japan, Canada and in the USA.

Since 1991 Lukas Christinat plays the principal horn in the Lucerne Symphony Orchestra. His chamber music performances with the Swiss Brass Consort, the European horn sextet and the Chamber Soloists Lucerne complement his musical work. He also carries out an active concert career together with organist Wolfgang Sieber. Since the fall  2000 Lukas Christinat  is a professor of horn and chamber music at the Lucerne Music High School.   He also gives lessons at the music school in Sarnen. As the head of the Horn Group Obwalden he is the initiator of the International Horn Festival in Obwalden since 1997.